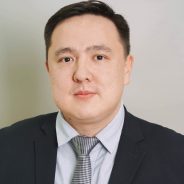 She began her career at GRATA Law Firm. From 2011 to the present, he has been working at QazTrade Trade Policy Development Center JSC.

Analytical and consulting support for export activities, implementation of the export acceleration program. 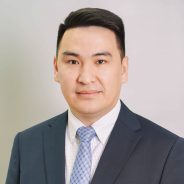 General information, education
In 2009 he graduated from the Russian State Agrarian University of the Moscow Agricultural Academy. K.A. Timiryazev with a degree in Management.
Held scientific training in South Korea, Japan, Turkey and China.
Participated in the Industry Change Management Program (2020).

Supervised issues
Supervises issues of interaction with the WTO, EAEU and OECD.
Head of the project team for the implementation of the ITC project from an institutional partner. 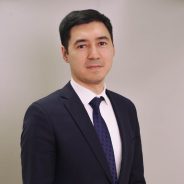 He began his career in 2014 as a manager for technical regulations of the Transport union of Kazakhstan “Kazlogistics”.

From November 2016 to 2017, he worked as a consultant at the School of Science and Technology of AEO Nazarbayev University, Astana.

From 2014 to 2019 – an analyst at the Silk Way International Institute of Logistics and Business.

From May 2017 to February 2020, he worked as the head of the Project Management Development Center, deputy head of the Center for International Partnership of Academy of Public Administration under the President of the Republic of Kazakhstan.

From January 2017 to the present – a teacher (Teaching Professor) of the Higher School of Economics of JSC “University” KAZGUU “.

From February 2020 to January 2021, he was the head of export promotion projects at QazTrade Trade Policy Development Center JSC.

Since November 2022, he has been appointed Deputy General Director of QazTrade Trade Policy Development Center JSC.

Membership in Boards of Directors:

Member of the Board of Directors of “Pavlodar State Pedagogical University”.

He leads directions of regional exports, export logistics, reimbursement of part of the costs to exporters, and electronic commerce.